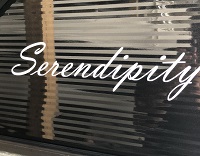 When I first got my boat, I almost put on a power-arm motorized Bimini but decided against it because of the restrictions it had with regard to cruising with the top in various positions.

95% of the time, we don't deploy the top, but we do have it "up" so it's high enough to walk under it to get to the rear door and also the bar at the back of the boat. The only problem is there is one low bridge that I can't quite get under with the top in the position shown in the picture. It's a PIA to lower it just to go under that one bridge, so we typically don't go that way even though one of my favorite restaurants is past the bridge.

It seems to me it would be really simple to replace the two supports that hold it in the up position with a couple of linear actuators. I could size the actuators so that when they are fully extended the Bimini is in just about the same position shown in the picture. When we approached the low bridge, I could just retract the actuators to lower the top enough to clear the bridge. I only need to gain about a foot.

Does anybody see why this wouldn't work? 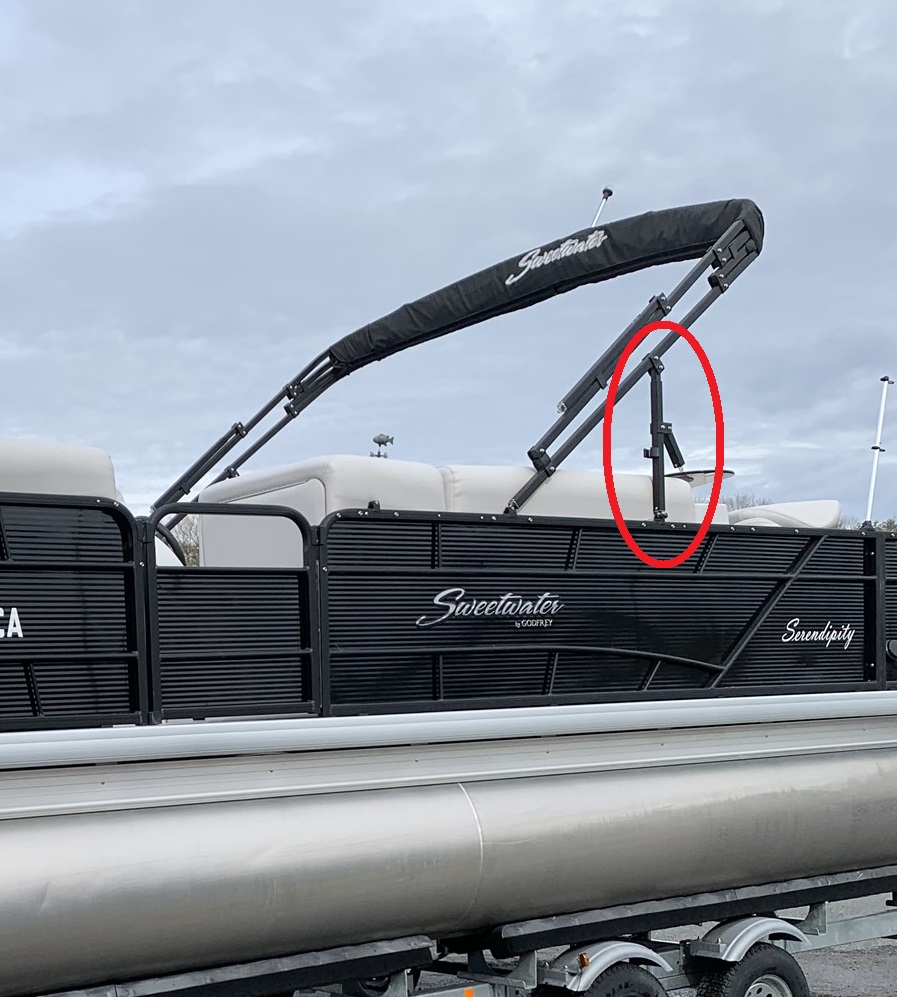 I don't know much about using a linear actuator but my concerns (again not knowing shit) with just replacing the radar arm with one would be
1. The trailering arm is maybe 1/3rd the length of the radar arm so I don't think you could replicate the exact setup and
2. I would think that the weakest a linear arm would be is when it's fully extended which is how you'd likely want it positioned most of the time.
I believe the true power tops have a actuator that is mounted horizontally so the top kinds scissors up and down.

What would be a lot cheaper and easier (to me anyway) would be to replace your ball lock pin radar and trailering arm hardware with DowcoLok hardware. That's what my G3 boat came with. They are one hand operation and spring lock. VERY easy to attach and remove. I can drop my rear top by myself in under 30 seconds....unclip one side and fold up, unclip the other side and lower to attach trailering arm, attach other side trailering arm. You'd replace the anchor point on each side with the DowcoLok button and then add the DowcoLok quick releases which I believe can be bolted to your existing eyelets. If not, I think they make a piece to install them in 1-1/4" tube. 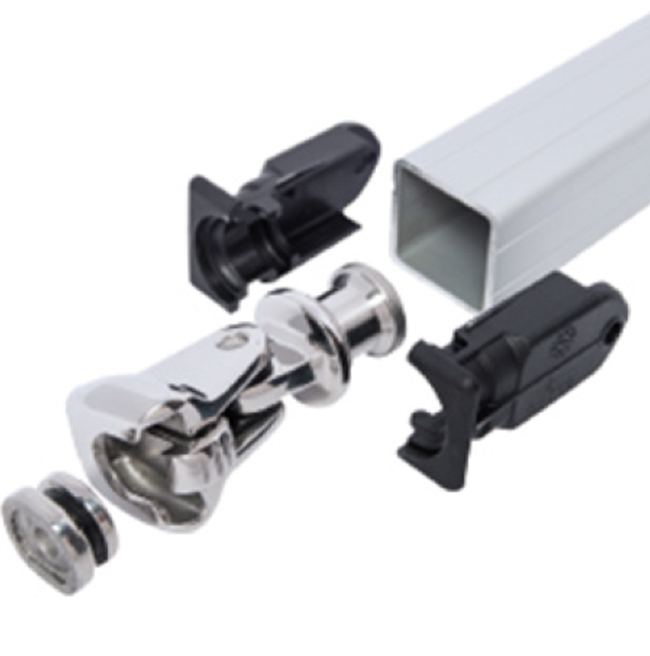 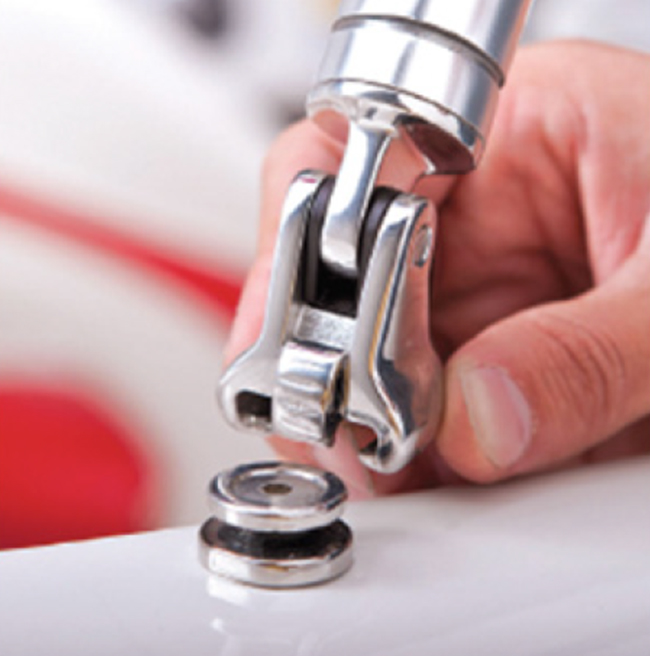 If you think that's a pain in the ass.....I built my shop ten years ago and it never occurred to me to put on a ten foot door instead of an eight foot...but then again I never planned on buying another boat. My Sweetwater would not fit in with the top on and you could not drop it down on the frame because the stupid seat backs pillowed out over the rail. I had to replace the front bolts with spring pins (and one of the factory rear ones went in the lake first trip out thanks to a bad crimp on the retaining cable) so we could detach the top. Every time coming home it was me and my wife coming close to divorce over her holding up the top while I pulled all the pins and then us dancing around to get the top laid sideways across the boat. Then recline the captain's chair, take off the windshield, and wrestle with the top half of the ski bar to get it off (also replaced the bolts with hitch pins). Going out was the reverse so another chance for a fight.

The new boat has two tops and I can get everything situated on my own mostly thanks to the DowcoLoks. First drape a towel over the front and rear rails. The front top will lay down on the frame, no trailering arms on it. The rear top I have to lay down and then remove the front bolts (which have knobs) and it'll lay down enough to clear the door frame. Then just wrap a bungee around each side so it won't shift off the rails and drop. It has a ski pole that just twists out and everything else clears without doing anything which is good since the windshield is screwed on rather than using the quick detach stuff Godfrey uses.
2019 G3 SunCatcher V322 SS tritoon, Yamaha F200 (purchased 07/2019)
2017 Godfrey Sweetwater 2086C pontoon, Honda BF90D (sold 07/2019)
2001 Sea-Doo Sportster LE 130hp Rotax (sold 05/2004, said I'd never own another boat!)
Top

Steiner-
Last year, I actually bought all the DowcoLok hardware you described and was going to do what you suggested. However, I decided it's still too much hassle to do manually. Yeah, I guess I'm being lazy, but I also am kind of a technology geek.

The concerns you mention are all valid, and I need to do some measuring (my boat is an hour away) to figure out exactly what size actuators I need. Remember, I'm not trying to get the top all the way down to the trailering position. All I need to do is drop it enough so the very top drops about a foot (when closed as shown in the pic), which means the actuator would only need to retract by less than that.

I think what I might do is a combination of my idea and yours. I'll replace the eyelet and pins on the supporting arm with the DocoLok system, and I'll mount the actuators directly behind the existing supports. This will leave the weight of the top on the existing supports, but when I want to lower the top all I need to do is release the Loks, which will transfer the weight to the actuators, then retract the actuators. When done I just reverse the process and lock the supports back in.

It looks like I can get some off brand actuators and all the wiring and switches I need for about $300. I can get Lenco actuators etc. for about $600 and I'm confident the Lenco would be robust enough for the job. So either way, it's a pretty cheap experiment. And if it fails, I just remove the actuators and I'm right back to factory setup with the added ease of the DowcoLoks.
Steve
2017 Sweetwater 2286 WB Tritoon w/ 150HP Yamaha "Serendipity"
Slipped at Lake Anna, Virginia
2018 Tesla Model X
Top 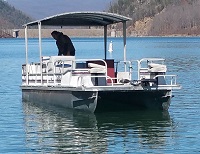 I love it...1st world problems, trying to get to favorite restaurant by boat

Not as pimp as a linear actualtor tho, can you tig aluminum?
Top

He's got ball lock pins already. They can be simple but most times they're finiky.....especially if you've got someone on each side working. Getting them out is usually no problem but going back in it can be difficult to get the eyelet and to line up right and you're using one arm to hold up the top in just the right place and get it forward/backward in just the right spot and the other hand is holding the pushbutton in on the pin and trying to get it through. The DowcoLoks are just so much easier and quicker.