6X6 was before my time, but i did read many of his post and can appreciate his contribution to life. i would like to submit his signature to his tribute.

That's his Signture alright and I had them in mine for a year or two but lost them on the last computer crash a few years back.

Thanks for posting the Super Hero's, brings back memory's.
In Memory of John 6x6 Larsen

As a newbie on the OPDB forum, I remember reading all his posts about PropGuard and his experiences..That's how I became interested in reading all I could find by him and about him..
A fascinating "Great Man" and liked by soooo many..

I joined the 'other' forum right at about the time John died. I remember thinking that this was more than just another internet forum, these people really cared about each other. And that has been the case over the few years that I've been here. I've only met a couple of forum members face to face, but I do feel like I know you all as well as I know most people around here.
24' Sunchaser, 115 HP Merc 4s
Greers Ferry Lake, AR
Top 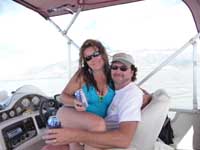 I think I was memeber# 103, or something. I was excited as hell about having a pontoon boat. You all know that "new toy" excitement. Ya just can't help yourself....

Anyway, when I found the site and started posting, John was so welcoming, not just to me, but to everyone else. Back then I read every post. John's demeanor set a tone that I think still exists today . Basically, say what you want, but back it up, and be respectfull in your reply's.

I remember the news about his heart attack. I remember all the get well wishes. I remember the day of the news. I bowed my head for a man I'd never met..... I wished I'd had. I still do 5 years later.

how cool is that. a good memory. thanks.
Top

Just flipping through here again and thinking....
Never met him either, but ive read a bunch of his posts.
Good man!!